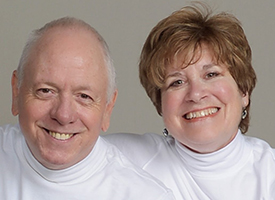 Rev. Christopher and Rev. Sharon Fazel have worked together on projects and careers pretty much since the moment they met in a MFA theater program which took them to many cities throughout the country. In L.A. they became active in their first A Search For God Study Group, and also joined a UNITED Church of Christ (UCC) church, where they discovered a wonderful new world of progressive religious thought and practice within a mainline Protestant tradition.

After leaving professional theater to relocate to Virginia Beach, VA, they pursued further investigation of the Edgar Cayce readings. Both were employed staff at A.R.E., Chris in Study Groups, Sharon in Conferences. Both presented A.R.E. courses in several states. Chris co-authored, with Mark Thurston, The Edgar Cayce Handbook for Creating Your Future and wrote several Venture Inward articles. His most recent article for Venture Inward appeared in the first issue of 2019.

Chris and Sharon's connection with the UNITED Church of Christ came to fruition when both graduated from a UCC seminary in the Twin Cities, Minnesota, with M.Div. degrees. Ordained, and installed as co-equal pastors in the same UCC congregation they served there for nearly 16 years. In their co-ministry they found ample opportunities to make connections with spiritual principles found in the Edgar Cayce readings. They enjoyed bringing their former association with the arts, both musical and theatrical, into the worship setting. And one of their passions was an inclusive invitation to "all of God's children" to live and learn from and with each other. Interfaith pursuits, especially involving Youth, were among their favorite activities.

Now retired from active ordained ministry,  they have relocated to Virginia Beach, to enjoy further interaction with A.R.E. and the many diverse individuals who seek a wider investigation of life's enduring questions and mysteries

Search All Events
Enter a name, program title or keyword
FIND YOURSELF AT THE BEACH

Would you like to see John Van Auken, Peter Woodbury, or Kevin Todeschi in your home town? If you would like to volunteer to help us host a conference, please contact us.