Andrew Jackson Davis was as well known in the nineteenth century as Cayce was in the twentieth. The Poughkeepsie seer was known during most of his adult life as a spiritualist and clairvoyant healer, prescribing individualized treatments for patients to follow. But he also served as a hands-on healer at times. He explained that “‘laying on of hands’ is only effective when the patient’s mind is receptive. When it came to offering cures for physical maladies, Davis gave a new meaning to unorthodoxy even by today’s standards of alternative medicine.

Davis often spoke of spirit guides and at age 18 declared that the Almighty had placed two guides at his disposal – the Greek physician Galen and the Swedish philosopher-mystic Emanuel Swedenborg. Davis called Galen his “guiding spirit.” Yet, he apparently did not function as a channel in the usual sense of the term. “Spirits have aided me many times,” he wrote on another occasion, “but they do not control either my person or my reason.”

There are striking parallels between the Cayce and Davis:

The Davis library contains 150 letters and copies of books written by Davis himself, discussing his recollections received while in a trance state.

From the full article The Poughkeepsie Seer (pdf) by Dan Campbell in Venture Inward magazine (July/August 1988).

Edgar Cayce was taken aback to discover the work of Andrew Jackson Davis. Therefore, the acquisition of his book collection, correspondence, and various personal items is significant to our library and archives. A particular item of interest was a personal, engraved, walking stick given to him by his family because they were aware of a profound mystical experience in which he had this divine revelation. While Mr. Davis was in a trance state he encountered a spiritual being who presented him with a magic staff. Inside the staff were small segments which contained the name of a specific illness and the cure. This mental cane became the symbol upon which he used to access information and became the title of his autobiography, “The Magic Staff.” The Andrew Jackson Davis collection is rare and important to Edgar Cayce’s A.R.E. Library, because their lives and approach to the trance state were strikingly similar as both were psychic diagnosticians.

In This Section
The Quickening 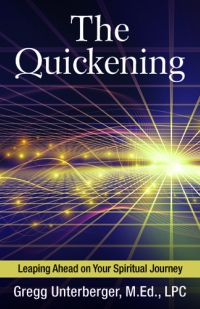 Leaping Ahead on Your Spiritual Journey

Psychotherapist Gregg Unterberger leads you into a miraculous world where ancient spiritual wisdom meets the cutting edge technologies of the new millennium. Find out how to shift your consciousness “on-demand” to that of a Tibetan monk without years of meditative practice.