This special collection is the culmination of one family's research. It includes the insights gained by exploring 34 family members and friends who had psychic readings from Edgar Cayce, several articles published in Venture Inward magazine, and reports of land expeditions into Bimini in search of the lost Atlantis.

We hope this material will inspire individuals around the globe to examine their own family's history.

After reading Sidney Kirkpatrick's suggestion that A.R.E. members explore readings in their own family history, Ann and Stan Jaffin were stunned to find out that several members of Stan's extended family had Cayce readings! Through their years together, they identified readings for 20 family members and 14 friends and interviewed the recipients all over the U.S. and in Europe.

Read the full story of the discovery, research, and conclusions of this Cayce research project.

Dr. Stanley Jaffin, called Indiana Jaffin by his wife, Ann, was an Atlantis adventurer. The impact of his work is important because the quest to find Atlantis still continues today.

About Ann and Stan Jaffin

Ann was introduced to Edgar Cayce when her mother gave her a copy of the book The Sleeping Prophet in 1967. She first came to Virginia Beach for an A.R.E. conference in 1969 and joined A Search for God study group in the fall of 1971. Ann and Stan Jaffin met in 1971 through a computer match. After dating for four years while Stan worked on his Doctorate in IT, they married in December of 1975. Ann introduced Stan to the Edgar Cayce Readings and both became members in the 70's and life members in the 90's. 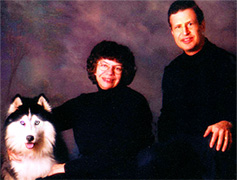 They frequently vacationed at the Marshalls Hotel, which had been located across the street from the Virginia Beach headquarters of A.R.E. where they attended Conferences, Egypt being one of their favorites. Stan was primarily interested in health and Atlantis and his passion for exploration took him to Bimini. Stan passed on July 13, 2010.