If you search the Edgar Cayce readings database for the term “astrological,” you’ll receive nearly 1,500 results. That’s because Cayce started every Life Reading with a look at the person’s “astrological conditions and aspects.”

A Life Reading is a reading in which Cayce is asked to consider the person (for whom the reading is being requested), and his or her purpose in this current life. His opening for this kind of reading always started something like: “Yes, we have the entity here, and those relations with the universe and universal forces, as are latent and exhibited in the present entity.” Followed closely by, “As to astrological conditions and aspects…”

And then Edgar Cayce used astrological concepts to explain the soul patterns (incarnations), whether these past lives were on the earth (three-dimensional) or on other planets or star systems in this solar system (not three-dimensional).

The biggest difference between Cayce’s perspective on astrology and what might be thought of as traditional astrology is that Cayce said that the placement of the stars and the planets at our birth were an indication of our past sojourns amongst the planets and the stars. The readings stated that these were indicators, or signs, of where we had been and what we had studied in “consciousness” in these other realms. In other words, the positions of the stars and planets at our birth aren’t predicting our future so much as they are telling us a story about our past, and how our past may be influencing our present. Here’s a Cayce reading that sums it up nicely:

“Those periods of sojourn during the interims between the manifestations in materiality are indicated from the astrological symbols or signs. Not that the body (as known as a body, physical) sojourned in Mercury, Mars, Jupiter or any of the other planets of this particular solar system. But the use of the mental in the opportunities in relationships to the spiritual and physical is indicated by a sojourn of the entity in the environs accredited with such an influence.

“Thus, as we find here, these are the characteristics, as might be said, which arise as a composite of the mental or the spiritual and material aspects.” -- Edgar Cayce reading 1664-2

Like anything from your past, your planetary sojourns can have a predictive effect on your present and your future. But Cayce was always quick to point out that the stars don’t influence us as much as we influence the stars! And there is no influence greater than our own free will.

"Then, as to the influences from the astrological aspects or sojourns during the interim, know that these are merely urges. As to what one does with or about an urge is oft dependent upon what an entity holds as its ideal—and then the application of will as respecting same.” (1842-1)

Here’s what Cayce said about the planets as astrological aspects in Life Readings. Looking up the placement of these planets in your chart can offer a better understanding of these influences in your current life:

“In that relation in Jupiter, makes for the bigness, the noblenesses, as are seen in the entity's experience…” (6-2)

“In those in Jupiter, of those of the broadness of vision… Nature has made of the entity a leader…” (5-2)

“…in Jupiter we find the high ennobling influences in the experience of the entity; in materiality making for associations ever with those in high places, in power, in authority, that deal with problems in the affairs of great numbers of individuals or peoples, or the masses.” (1285-1)

“In Venus we find the love of home, of companions, of friends and close relations…” (24-4)

“As we find in the Venus influences, one that makes friendships; one that has a following in whatever endeavor the entity may make in the experience.” (1437-1)

“…for Mercury means mental, as does Venus love, understanding, beauty and the like, as does Jupiter strength, stamen, broadness of vision, temperamental; and these all are from those experiences of the entity in its sojourn through these environs.” (264-31)

“From Mercury also there are those abilities for the judgment and DISCERNMENT of the entity, as it were, in the present.” (283-4)

“Saturn's influences have made for rather those test periods, and those experiences where the mental attitude necessary had to be expressed or manifested in order for the entity to remain steady.” (322-2)

“Saturn has made for a great many changes that have been eminent, though not often made in the entity's experience. The desire to do this and the desire to do that, and the attempt to make this association and that association, in all its various activities, arise from those innate urges from the sojourn of the entity in same.” (914-1)

“In Venus and Mars we find the artistic temperament, and hence those activities as would have to do with pattern making, or designing of anything made of metal or wood…” (2915-1)

“In the astrological aspects we find these have been as the ruling forces: Mars, as related to material things. Hence there have been in the experience some very disturbing forces in the activities of those associated with the entity in their relationships to madness, anger, satisfying of personal appetites, aggrandizement of interests; and these have been problems for the entity.” (1438-1)

“In the influences in Mercury, with those in Uranus, makes for those conditions that are easily besetting in the entity's experience, of individuals groups - having that influence as to ‘What will people say? What will individuals think?’ …

“In this also we find; those influences that bring about CHANGES in the entity's individual surroundings, as related to groups. The entity influences GROUPS, rather than individuals.” (413-1)

“Neptune and Uranus both coming within the entity's experience through the sojourns there, those things that pertain to the mysterious, the MYSTIC forces or occult sciences, are ever of interest.” (997-1)

“Neptune making for those of the MYSTIC, especially influencing this entity in the respect that those forces as come from that as may be termed odors, INCENSEs, or such, will influence the entity in an unusual way and manner.” (1714-1)

Edgar Cayce reminds us of the influence of the planets as to our consciousness but again tells us that our free will is the decider—the choice-maker—of our lives. In summary:

“So, all of those realms - as in Mercury, Venus, Jupiter, Saturn, Uranus - have their realms of consciousness also. As to how great the influence is depends upon the individual, for none surpass the will of the individual entity - the birthright of each soul. For, the soul is that child of the universal consciousness ye call God, and is made aware of same by the application of laws pertaining to same in the own self.

“Thus the knowledge, the understanding, the interpretation of life, lies within thine own self, as ye apply same in thy activity.” (2823-1)

Receive a Free Astrology Forecast + 25% Off! 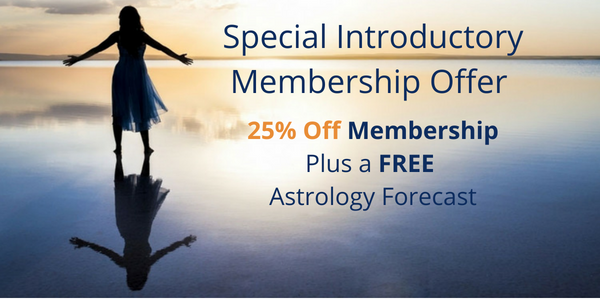 Save 25% and Receive a 12-month Forecast

Save 25% on Traditional Annual Membership, plus receive a personalized 12-month Astrology Forecast and gain access to the entire online database of 14,306 Edgar Cayce readings! Traditional Members receive our quarterly magazine, Venture Inward and the Cayce Quarterly newsletter by mail along with online access to the member-only section with exclusive bonus materials like  ourEnlightenment Series: Monthly Practices for the Soul, and member-discounted pricing on conferences, books, charts, services, and fees.