Almonds are mentioned somewhat infrequently in the Cayce readings, yet, according to his rather definite statements, apparently have a very important job to do in the metabolism of the human body.

Cayce makes no statements about the physiology of the action of the almonds, although in one reading he did state that within the almond was a substance that he called a vitamin. He stated that taking two or three almonds a day would prevent a tendency toward cancer. Nowhere, apparently, does he mention almonds as a treatment for cancer. He did suggest the use of them to several people after they had a cancerous growth removed and likewise in several places to prevent the tendency for it ever occurring. 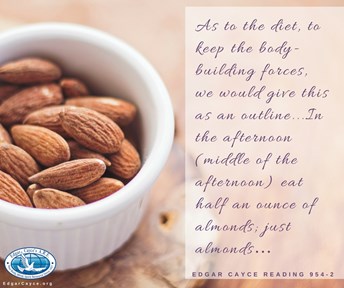 The almond, Prunus amygdalus, is closely related to the peach, Prunus persica (also called Amygdalus persica), and likewise to the apricot, Prunus armeniaca. The almond nut is of two distinct types, the bitter and the sweet. The bitter almond contains a ferment, emulsin, which in the presence of water acts on the glucoside, amygdalin, and yields glucose, benzaldehyde and hydrocyanic acid. Amygdalin, of course, is present in the sweet almond, but not the ferment, emulsin. It is interesting to note that a cancer therapy, Laetrile, which has been discredited and banned by government authorities, is described as an extract from the apricot kernel, and is for the most part hydrocyanic acid. It has been hypothesized by the discoverer that this acid is destroyed in the body by normal cellular oxidative metabolism, but cancer cells, functioning without oxidative mechanisms, are unable to destroy the acid; thus they absorb it and are destroyed themselves. Cayce mentioned some of these mechanisms in his readings. He suggested sweet almonds rather than the bitter, advised they be used in the prevention rather than the cure of cancer, and ascribed their value to a vitamin-type substance rather than an acid. Perhaps this followed his general philosophy of doing things gently and gradually rather than sharply and abruptly. However, it is interesting to note the relationships between these substances that have both been used now in human beings in relationship to the disease called cancer.

[Note: The preceding commentary was written by William A. McGarey, M.D. and is excerpted]

[Note: The following report was recorded by William A. McGarey, M.D. and is excerpted from the Physician's Reference Notebook, Copyright © 1968 by the Edgar Cayce Foundation, Virginia Beach, VA.]

Ever since we left Virginia Beach, I have had in mind putting down on paper, as you requested - the story of my mother [5009], and the polyps and the almonds, so here goes:

In July 1957, my mother was operated on for a malignant mass in the intestines. The surgeon removed a segment of bowel to which was attached a polyp, as well as the mass. He told my brother and me that he would have liked to have removed also a further segment on which two or three more polyps (benign, of course) were located but he feared she could not have stood that much nerve shock. He said he wished to watch closely by x-ray the polyps every three months. Subsequently, I urged Mother - as soon as she was out of the hospital - to eat several raw almonds a day - whether she believed in them or not (and although she tends to discount and negate a lot she was scared enough to heed me!). In three months the x-ray pictures showed the remaining polyps "somewhat smaller" - the doctor reported. In another three months the doctor said he couldn't discern any polyps at all in the x-ray pictures and was so pleased that he changed her periodic x-ray pictures from every three months to every six months. In another year - he changed to x-ray photos only once yearly. It has almost been 3-1/2 years now since her surgery and there has been no return of any trouble or of any polyps (and her last x-ray photos were of her entire body-torso as well as abdominal region). So, this is a good report for "the almond."

Note: The above information is not intended for self-diagnosis or self-treatment. Please consult a qualified health care professional for assistance in applying the information contained in the Cayce Health Database.