In many versions of the holistic philosophy, the whole person is defined as a physical/mental/spiritual entity. Certain versions focus more on the interpersonal and social aspects of life. Whatever the particular viewpoint, the defining characteristic of a holistic approach is its comprehensiveness with regard to health. As noted by James Windsor "... Cayce saw a person as a whole, with mind, body and spirit as a single unit, all so closely tied that it was not possible for one aspect to be diseased, either physically or mentally, without the whole person suffering the consequences" (Windsor, 1969, p. 1).

The association of "holism" with the Cayce readings has since become widely recognized, culminating in this reference from an editorial in the Journal of the American Medical Association:

"The roots of present day holism probably go back 100 years to the birth of Edgar Cayce in Hopkinsville, Ky. By the time he died in 1944 [sic], Cayce was well recognized as a mystic who entered sleep trances and dictated a philosophy of life and healing called "readings." His base was established at Virginia Beach, Va, now the headquarters of the Cayce Foundation. (Callan, 1979, p. 1156)

While Edgar Cayce is often cited as the founder of holistic medicine, Eric Mein is correct in acknowledging the ancient roots of this approach.

"Health and disease 2,500 years ago were viewed as either the gift or the curse of the gods. The god of healing was Aesclepius, son of Apollo. By the time of Alexander the Great, it is estimated that there were between three hundred and four hundred temples dedicated to Aesclepius. Each of these was a "holistic healing" center far beyond anything that exists today." (Mein, 1989, p. 194)

Thus holism is yet another manifestation of the perennial philosophy. The work of Edgar Cayce is one of the most recent (and perhaps the most thoroughly elaborated) versions of this philosophy.

Note: The above information is not intended for self-diagnosis or self-treatment. Please consult a qualified health care professional for assistance in applying the information contained in the Cayce Health Database. 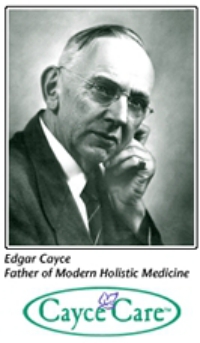 From organic massage oils and ointments, to soaps and herbal remedies, find what suits your holistic health care needs. Baar Products is the Official Supplier of Edgar Cayce remedies and the Cayce Care line of products.