The Great Pyramid in Egypt is the only surviving member of the “Seven Wonders of the Ancient World.” The other six wonders were the Colossus of Rhodes, the Statue of Zeus at Olympia, the Mausoleum at Halicarnassus, the Hanging Gardens of Babylon, the Temple of Artemis (Diana) at Ephesus, and the Lighthouse at Alexandria.

Even in the modern world of today, the Great Pyramid on the Giza Plateau is a marvel of design and engineering. Sir Flinders Petrie (1853-1942), an English archaeologist known as the “father of modern Egyptology” wrote: “The pavement, lower casing and entrance passage are exquisitely wrought; in fact, the means employed for placing and cementing the blocks of soft limestone, weighing a dozen or twenty tons each, with such hair-like joints, are almost inconceivable at present; and the accuracy of the leveling is marvelous. How in the casing of the Great Pyramid, they could fill with cement a vertical joint about 5 feet by 7 feet in area, and only an average one-fiftieth (1/50) part of an inch thick is a mystery. Yet this was the usual work over 13 acres of surface, with tens of thousands of casing stones, none less than a ton in weight.” (30, p. 213) W. Marsham Adams (1838-death date unknown), a British Egyptologist, fellow of Oxford’s New College, wrote: “It is absolutely unique. No other building, it may be safely averred, contains any structure bearing the least resemblance to the upper chambers.”(1, p. 34) Architect James Fergusson (1808-1886), the 1871 recipient of the gold medal of the Royal Institute of British Architects, wrote in his book The History of Architecture (published in 1855) that the Great Pyramid is “the most perfect and gigantic specimen of masonry that the world has yet seen. No one can possibly examine the interior of the Great Pyramid without being struck with astonishment at the wonderful mechanical skill displayed in its construction. The immense blocks of granite brought from Syene [Aswan, in southern Egypt], a distance of 500 miles, polished like glass, are so fitted that the joints can scarcely be detected. Nothing can be more wonderful than the extraordinary amount of knowledge displayed in the construction of the discharging chambers over the roof of the principal apartment, in the alignment of the sloping galleries, in the provision of the ventilating shafts, and in all the wonderful contrivances of the structure. Nothing more perfect, mechanically, has ever been erected since that time.” (18, p. 85)

Features of the Great Pyramid

There is no way to give all of the amazing features, mathematical wonders, and marvelous engineering feats of this pyramid without becoming overwhelmed. And there are plenty of books and Web sites that do this for you. But some of the more mysterious features should be noted here for they lend greater credence to the pyramid prophecy. First among the mind-stretching facts about this wonder is the extraordinary degree of precision found throughout it. The architects and builders were more than the theory of evolution would tolerate, given that everything old is primitive and we today are the apex of evolution. How could ancient primitives conceive of such a structure and then execute the building of it within tolerances that would be very difficult, if not impossible, to recreate today? We have already read the comments and the astonishment of some the experts who studied the edifice in the 1800s. Here are some of the most perplexing and mysterious features: 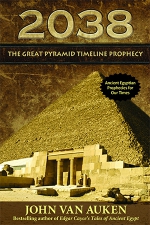 Come forth into the light. John Van Auken presents the story of the prophecies from inside the Great Pyramid in Egypt that foreshadow into 2038.