American Indians and
the Edgar Cayce Readings
By John Fuhler

Eleven thousand years ago, an event that would forever change the face of North America occurred: a mother with an exceptionally rare genetic marker bore a daughter, who passed along the same genetic marker to her daughters. This particular genetic marker (Haplogroup X2) directly links the peoples of Northeastern North America to the peoples of the Eastern Mediterranean and North Africa. Currently the actual migration route by which this was achieved is unknown inasmuch as contemporary archaeology is concerned. What can be demonstrated by geneticists is the populations with this specific genetic marker migrated out of Africa and the Eastern Mediterranean into Eurasia and North America around or after the Last Glacial Maximum. Based on the nature of the mutations distinguishing the American from the Middle Eastern form of this genetic marker, these populations arrived in North America no later than 11,000 years ago.

Of great importance to this discussion is that the American Haplogroup X2 is linked to the Western Eurasian version of this marker. Haplogroup X is unknown in Siberian or East Asian populations; and the eastern-most mutation of the marker, occurring in the Altay Region of Central Asia, didn’t arrive there until some 4,300 years after Haplogroup X2 had appeared in America.i

Until recently American anthropologists held firmly to the hypothesis that all indigenous American peoples were descended from one group of Asian people who crossed the land bridge over the Bering Sea during the last Ice Age. This hypothesis is being challenged on all sides, and not only by the genetic data, but also by archaeological and linguistic data.ii


In a recent article in the Occasional Papers of the Epigraphic Society, data corroborative of the geneticists’ findings demonstrated the intimate relationship between the languages of the Algonquian peoples of Northeastern North America, and the Afro-Asiatic languages of North Africa and the Eastern Mediterranean. Using several measures of linguistic affinity, the genetic relationship of the two language families was proven. Among the data given, it was demonstrated that the similarities between the Menominee and Hebrew pronominal affixes being due to chance is 0.000005. This greatly exceeds the measure of 0.00001 required to establish a (linguistic) genetic relationship. Another example was a comparison of the Proto-Afro-Asiatic and Proto-Algonquian pronominal systems. The probability of the similarities between the two proto-languages being due to chance is 0.00000625. Again, the genetic relationship is affirmed. And as if these two measures weren’t enough, a statistical analysis of two sets of words, one Egyptian, the other Ojibwa, each set representing a group of words derived from a common root, revealed the probability of these being similar by chance is 0.000000039!iii

American anthropology cannot explain these relationships. Prior to the discovery of Haplogroup X, there was no serious consideration of the possibility of a trans-Atlantic relationship between Old and New World peoples. Even today it is so challenging for conventional archaeologists to explain the genetic relationship, several scholars continue to cleave to the old hypothesis of the trans-Beringia crossing. They choose to believe a group of adventuresome individuals, the women bearing the Haplogroup X2 marker, traveled some 10,000 km. (6,000 mi.) from the Altay Region of Central Asia to the Western Great Lakes of America, the heart of the genetic marker in America, without leaving a telltale genetic trace along the way! 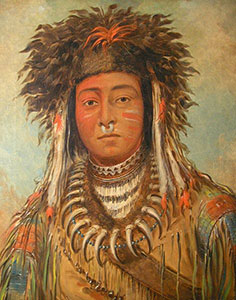 The questions arise, then, from where did these trans-Atlantic populations come, and how did they arrive at their final destinations? The Edgar Cayce readings provide tantalizing clues. Before embarking upon the explication of specific readings, it must be kept in mind that Mr. Cayce’s contemporary archaeologists believed the Algonquian Indians had only entered the continent about 366 CE!iv Their apparent route was across the Bering Strait, down through the Yukon, and then across the Great Plains, all on foot. Since that time, generations of American archaeologists and anthropologists have worked diligently to make the data fit the assumption that all Western Hemisphere peoples came in one wave across the Bering Strait during the last Ice Age through the hypothetically ice-free corridor. Against this backdrop we find Edgar Cayce presenting very different information.

In the readings, the peopling of the Americas was accomplished by several different mechanisms, including Creation, as well as multiple waves of migration. The immigrants came from Lemuria, Atlantis, the Promised Land, etc.

The appearance of man…was in five different places…at the same time. The white race…in the Carpathian basin, the yellow in Tibet, the red in Atlantis, the brown in Lemuria, the black in Africa. (294-202 Report)

Before the final destruction…many of the inhabitants migrated to adjoining countries. The Inca and Aztec were descendants…as were the American Indians… (364-6 Report )

…during those periods…those peoples that were Lost Tribes came into the land… How did the Lost Tribes reach this country? Boats. (Edgar Cayce Reading 5750-1)

Numerous possibilities for dispersion of the Haplogroup X2 genetic marker are suggested in these readings. But several questions arise. During which of the migrations did the populations in question arrive at their current locations? Why, given the frequency of the Atlantis-Yucatan Peninsula relationship mentioned in the readings, is this genetic marker focused on the Great Lakes, and especially the western end of Lake Superior? If the Lost Tribes were the source of the genetic marker, why do the geneticists not find a more recent arrival time, which conforms to the time frame given in the readings? Inasmuch as the Algonquian Language Family is concerned, its entrance into North America appears to have been much farther to the north relative to the Yucatan.v Why are there no readings identifying this area as a place of entrance of the migrating Atlanteans? Or are we to assume that the Atlanteans were already living along the Eastern Seaboard?

On the other side of the Atlantic, the hypothetical progenitor of Haplogroup X2 occurs across North Africa. Is this a vestige of the first emigration to the Pyrenees and Morocco mentioned in Reading 364-6? Does the occurrence of Haplogroup X2 in North America represent the migrations which preceded the final destruction of Atlantis about 12,000 years ago? Remember, it was this wave of emigrants whom Edgar Cayce identified as forebears of the Inca, Aztec, and American Indians.

Many of Edgar Cayce’s statements about the peopling of North America, and the Western Hemisphere in general, have only recently and coincidentally been corroborated by archaeologists. It has become increasingly difficult for the archeologists to make the data fit the paradigm.vi The field of linguistics is challenging the conventional wisdom, as well. And much of what the linguists are learning is confirming the evidence in the readings. Given that American archaeology is still in its infancy, one can only imagine what remains to be discovered.

i Reidia, et al. Am J Hum Genet 2003 November 73(5):1178-1190 (Published online Oct 20, 2003: www.ncbi.nlm.nih.gov/pmc/issues/120394/).
ii Cf. Gugliotta, G. The First Americans. Smithsonian. February 2013 43(10):38-47.
iii Fuhler, J.T. Occasional Papers of the Epigraphic Society. 2007. Vol. 25. pp59ff.
iv Voegelin, C.F, et al. 1954. Walam Olum or Red Score: The Migration Legend of the Lenni Lenape or Delaware Indians. Indianapolis. 277.
v Siebert, F.T. 1967. The Original Home of the Proto-Algonquian People. In Contributions to Anthropology Linguistics I (Algonquian). Anthropological Series 78. National Museum of Canada Bulletin 214:12-47. Rogers, R.A. 1985. Glacial Geography and Native North American Languages. In Quaternary Research 23:130-137.
vi The degree to which American archaeologists have gone to make new data fit the established paradigm is demonstrated by the volume of data which are rejected by them. The reader is encouraged to find and explore Forbidden Archaeology: the Hidden History of the Human Race, by M.A. Cremo and R.L. Thompson. One of the reports included therein documents the Calico Site findings of Louis S. B. Leakey, whose name is synonymous with anthropology worldwide, but whose work in California doesn’t even merit a footnote in most textbooks.