Edgar Cayce advanced the teaching about yin-yang duality to include the composition of our souls and what happens when we incarnate. He explained that we project only half of our whole soul—either our feminine (yin) or our masculine (yang). As a result, when incarnate we are not whole. We feel that a piece of us is missing, so we go searching for this piece out here among incarnating souls. As a male projection, we would look for a complementing female. As a female, we would look for a complementary male. Not surprisingly, the true complement is NOT out here! Metaphysical teachings state that the true complement is within us! We call this “getting in touch with our feminine side or masculine side.” Interestingly, we make better outer mates when we are in touch with our inner complement. The truth is that no outer incarnate person can fulfill our need for wholeness. Cayce affirmed this: “Know, the soul is rather the soul-mate of the Universal Consciousness than of an individual entity.” (2988-2)

According to Cayce’s channeling, when we project half of our yin-yang soul, the other half may incarnate as well! Cayce called this our “twin soul” (not a soul mate). He even gave examples of incarnate twins. He explained that he, Edgar, was the yang half of his life-long assistant Gladys Davis, the yin half! These two complemented each other in that Edgar channeled information and Gladys recorded it, typed it up, indexed it, and published it! When past-life readings were given for these two (Edgar and Gladys), they revealed that they often incarnated together in varying roles and relationships.

A Christmas Surprise from Cayce

The most astounding twin-soul story that Cayce channeled was about the Logos, the Word, the Messiah. As sacred as this soul is to us, it too experienced life as we have and do. According to the Scriptures and Cayce, the Logos entered the contrived duality to help us overcome the captivating forces that bind us to this world’s limited energy and awareness. The following is Cayce’s channeled story of the yin-yang incarnations of the Logos:

When we (our souls) first descended out of the realms of essential oneness into personal, separate, physical bodies, we lost touch with our original spiritual nature. We became focused on physicality and personality. We lost touch with oneness, resulting in feelings of separateness, even aloneness. We also got caught in the cycles of Nature, which included awake/asleep and alive/dead. In an effort to awaken us, the Messiah descended into this reality to show how to transcend the illusion of these limitations.

The first incarnation of the Logos was in prehistorical Atlantis, in what Cayce called “the first Eden.” The Logos separated into the yin of the legendary first female Lilith and the first male, Amilius (as reflected in our word, ameliorate, which means “to make something bad better”). These twins of the Logos soul continued to incarnate at various times. Their last incarnation, according to Cayce, was as Mary, the Essene mother of Jesus, and her son Jesus. I realized how shocking and even disturbing this teaching may be, but let’s push on with Cayce’s story.

Much of the channeled material about Mary is found in Cayce’s reading #5749-8. In this reading a group called the Essenes had for nearly 300 years devoted themselves to being channels for the Word, the Logos, the Messiah to incarnate. They understood that the only way into this world was and is through the womb of a woman, so they sought young women who could become ideal channels for the Sacred Incarnation. On one occasion a woman named Ann came to their temple complex in Mount Carmel stating that she had become pregnant without “knowing” a man. They brought her into the temple and cared for her. When Ann gave birth to a girl, the leaders became concerned because they were expecting a boy. However, some of among them put forth the idea that the feminine half of the Logos might also be conceived by the Holy Spirit, not by a human. Thus, they included her daughter Mary in with the other young candidates. Cayce shared that these girls were kept on a special diet and were highly trained in spiritualizing concepts and practices. Cayce listed their training to include “physical and mental exercises in chastity, purity, love, patience, and endurance.” He said that they went through trials and tests. When Mary was four years old, she was “chosen.” When she was twelve years old (the age for marriage engagements in those times), an angel appeared over her during a ceremony, causing everyone to accept her as the channel. However, when Mary did not become pregnant, their impatience took over and they sought to find a male among them to mate with this temple virgin and produce the male child. Despite their impatience, they did not want to spoil her purity, so they chose an older, pure-hearted male from among them, the carpenter Joseph. Cayce shared that Joseph was 36 and Mary was 16.

For various reasons and human attitudes, Mary is often depicted as a sweet, shy, quiet woman, but this was not the case. Listen to how she spoke to her aunt Elizabeth, the mother of John the Baptist: “My soul magnifies the Lord. My spirit has rejoiced in God my Savior, for he has looked at the humble state of his handmaid. For behold, from now on, all generations will call me blessed. For he who is mighty has done great things for me. Holy is his name. His mercy is for generations of generations on those who fear him. He does mighty deeds with his arm. He scatters the proud in the imagination of their heart. He puts down princes from their thrones; and exalts the humble. He fills the hungry with good things. He sends the rich away empty. He gives help to Israel, his servant, in remembrance of his mercy, as he spoke to our fathers, to Abraham and his offspring forever.” (Luke 1:26-55) Clearly these are the thoughts and words of a trained person who is confident in herself and her role. Consider how she received and spoke with an archangel when she was just sixteen: “Having come in, the angel said to her, ‘Rejoice, you highly favored one! The Lord is with you. Blessed are you among women!’ But when she saw him, she was greatly troubled at the saying, and considered what kind of salutation this might be. The angel said to her, ‘Don’t be afraid, Mary, for you have found favor with God. Behold, you will conceive in your womb, and bring forth a son, and will call his name “Jesus.” He will be great, and will be called the Son of the Most High. The Lord God will give him the throne of his father, David, and he will reign over the house of Jacob forever. There will be no end to his kingdom.’ Mary said to the angel, ‘How can this be, seeing I am a virgin?’ The angel answered her, ‘The Holy Spirit will come upon you, and the power of the Most High will overshadow you. Therefore also the holy one who is born from you will be called the Son of God. Behold, Elizabeth, your relative, also has conceived a son in her old age; and this is the sixth month with her who was called barren. For everything spoken by God is possible.’ Mary said, ‘Behold, the handmaid of the Lord; be it done to me according to your word.’ The angel departed from her.” (Luke 1:26-55) Again we witness a well-trained, clear-minded girl engaged in a conversation with an archangel!

Add to these examples how Mary and Jesus talked to each other: “On the third day there was a wedding in Cana in Galilee, and the mother of Jesus was there. Jesus and his disciples were also invited to the wedding. When the wine ran short, the mother of Jesus said to him, ‘They have no wine.’ Jesus said to her, “Woman, how does your concern affect me?” Let me stop here and correct this passage. This is a Hebrew idiom. (an idiom is a group of words having a meaning not deducible from words, for an English example: “my dogs are barking” is about feet hurting not dogs.) The Hebrew idiom actually means: “What does this have to do with us?” The English Bible translation makes it sound as if Jesus was dismissing his mother and speaking disrespectful to her—which he was not! Let’s continue: “‘My hour has not yet come.’ His mother said to the servers, ‘Do whatever he tells you.’” Clearly she has strength and leadership with her son and knows his powers. We know that Jesus then turned the available water into wine and this became his first miracle. The Bible passage goes on: “After this, he and his mother … went down to Capernaum and stayed there a few days." (John 2:1-12) Notice that Jesus and Mary were traveling together. Yin-yang were interdependent—one cannot exist without the other, even in the case of the Logos. Mary was present to the very end, even at Jesus’ crucifixion, and received direction from him while on he was on the cross. After Jesus’ ascension into heaven, her house in Ephesus was a gathering place for ongoing activities. In 40 AD while still incarnate she supernaturally appeared to the apostle James in Zaragoza, Spain, and instructed him to begin his ministry to that country, and he became the patron saint of Spain. Like Gladys did for Edgar’s work, Mary kept the ministry of Jesus going.

You might think that we should go looking for our twin soul out here, but the better way for us to use these teachings is to get in touch with your inner, complementary half. Cayce instructed us to do this through our dreaming sleep (he called this the “safest” way), developing intuition, inner listening, and experiencing deep meditative oneness with God. In some of Mary’s messages she expressed the need to get going now because there will come a time when the Earth will only allow enlightened souls to enter. See chapter 20 in the Revelation which addresses this era when all evil is banished from Earth and Christ rules. Cayce directed us to put in our hearts to be a part of that golden age!

This blog is part of our 2020 Enlightenment Series. Members can access all of the available material, which includes an online video and downloadable monthly lesson, in the Member-only section of our website at EdgarCayce.org/members. Not a member? Join now. 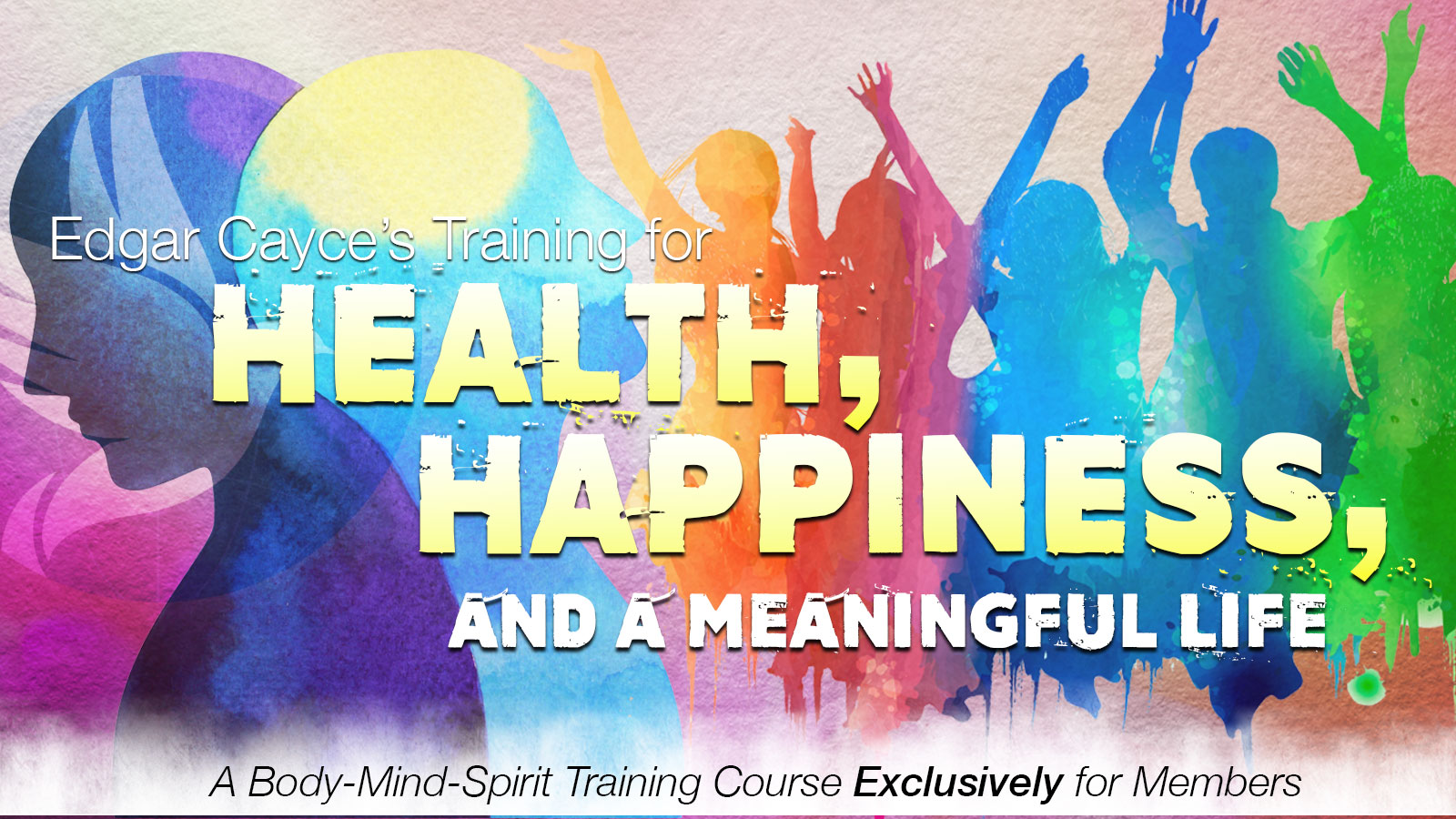