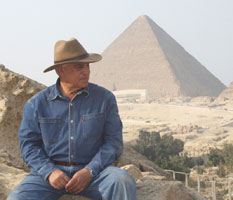 You and I take our democracy for granted, forgetting just how difficult it is to build and run this people-based form of government. But Egypt is just learning about how hard it is to govern by and for the people, and their many differing demands.

Egyptian Prime Minister Essam Sharaf fired Dr. Zahi Hawass as Minister of Antiquities on Sunday, July 17th, along with 14 other ministers, all of whom were considered to be too closely associated with the old Mubarak regime. Saraf was under pressure by the young protesters to remove these remnants of the old dictatorship. However, Hawass is not an easy guy to replace.

Sharaf's replacement for Hawass turned out to be unqualified for the job. Abdel Fatah al-Banna is not an archaeologist! Egyptian archaeologists complained that a "restorationist" cannot oversee archaeologists! Al-Banna withdrew his nomination on Monday, and the Prime Minister was forced to ask Zahi to return to work!

However, Hawass's future remains in doubt. The question is, can the Egyptian people forgive Hawass's relationship to Mubarak and the old ways?

A.R.E. has every intention of continuing its research in Egypt following the guidance in the Edgar Cayce readings and evidence discovered through nearly 50 years of searching for the hidden Hall of Records.

Zahi assures us that he is coming to our Ancient Mysteries Conference this October at A.R.E. Headquarters no matter what the situation is in Egypt. We are happy to hear that.

Update 7/25/11: Dr. Hawass said, "I am retiring to focus on my own work, as a scholar and a writer," adding he is looking forward to "living quietly as a private person, away from politics."

John Van Auken, a director at the Association for Research and Enlightenment, is an acknowledged expert on the Cayce readings, the Bible, ancient prophecies, world religions, meditation, and ancient Egypt. John conducts seminars in the U.S. and abroad, and is a tour guide to the many sacred sites around the world with A.R.E. Travel. He is the author of numerous books, including Edgar Cayce and the Kabbalah, Ancient Egyptian Mysticism and From Karma to Grace. He will be presenting at several upcoming Virginia Beach Conferences including the Annual Ancient Mysteries Conference: Searching for the Ancient Records: Closer Than Ever Before from October 6-9 featuring Dr. Hawass.