Opioid addiction and resulting overdose deaths are in the news every day. The Centers for Disease Control (CDC) estimates that 11.4 million people in the U.S. currently illegally take prescription pain killers. Problems with opioid use have been around for as long as the drugs have been available for pain relief and anesthesia. Opioids, drugs that act like opium, have been used for over 4,000 years around the world. Opium from the poppy plant is processed to create medicinal and illicit drugs like morphine, heroin, fentanyl, and codeine (oxycodone and hydrocodone.) Anyone that has had major surgery under general anesthesia has likely received one of these drugs. Pharmaceutical companies began marketing these pain relievers in the late 1990s, and over the following decades, addiction increased and overdose death rates climbed from 8,048 in 1999 to 47,600 in 2017 (the most recent year’s data the CDC has reported).

Even in Edgar Cayce’s day, opioids were commonly used. The Cayce readings mention heroin, opium, and morphine. Some Cayce remedies include opioids that were to be ingested, inhaled, injected, or applied to the skin for pain relief and healing. The readings also contain warnings of the addictive and dangerous nature of these drugs. Reading 3983-1, given in 1910, states, “…for this spasmodic and aggravated condition we might have to resort to Heroin which is not to be taken unless necessary.”

In reading 1967-1, from 1939, codeine and morphine are described as “habit-forming.” Since one of the young doctors I trained under in the 1980s died from an accidental fentanyl overdose (he was using it illegally as a sleep aid), I was especially interested in the readings given for a middle-aged doctor who first requested a health reading in 1917 to help with pains in his face and head. The reading describes major problems in his digestive and respiratory systems. By 1922, the man was addicted to narcotics and dying, his reading (5618-2) stated, “It will be hard to keep this body here.” and, “At present [5618] is made up of spiritual forces which are ready to leave.” But in 1925, he was still alive, and his fourth reading recommended an elixir that contained various healing agents as well as a specific dosage of heroin:

This we find will give throughout the whole system the alleviation of distresses, of desires, of the system, in functioning organs, to draw on either the sensory system or the sympathetic system to supply that necessary. Hence the body, through its own will forces, will be better able to meet the resistance in the system.

The excerpt above describes what doctors now consider an appropriate use of a narcotic—to provide the body with pain relief and enable it to rest long enough for the body’s own healing mechanisms to kick in to deal with the problem. Continuing to provide the addict with a measured dose of heroin also prevented him from going into withdrawal and experiencing common symptoms like nausea, vomiting, diarrhea, sweating, irritability, pupil dilation, and more—painful symptoms that likely would have driven the addict to use more. Without the medicines currently available to ease these symptoms, the best option for an addict in Cayce’s day would have been to wean slowly from the opioid to avoid a withdrawal crash. With support from his extended family, Dr. 5618 managed to stick with the recommendations. The next year, in June of 1926, the 59-year-old physician and osteopath obtained another reading from Edgar Cayce. This time, the reading recommended that he avoid any type of drug or medication and focus on self-healing in body, mind, and spirit.

There needs to be the care of the diet, for those conditions as necessary for the BUILDING of blood, of strength, of vitality, of muscle; and air, sand, water. These are needed more for the body than any other condition - sunshine and shadows. The body needs to get CLOSE to nature, with nature's curers - as will be found in sand, sunshine, water, woods; and the body with this kind of food - of NOT the highly seasoned, but that of the nutritious nature. Fish, fowl, and much vegetable; celery, lettuce, and the spring - or the vegetables green as much as possible. Corn bread (not white bread), whole wheat bread. Such natures as this, and we will find, in three to four weeks, with such care of self, such taking of sunshine baths, of sand baths, of walks in wood, of communing with nature, and of introspection of self and duty to self and that owed to mankind and to God, through the efforts of the individuals themselves, there will be brought strength, power, force, vitality. Do that.

The doctor must have “done that,” since the four subsequent readings in 1926 demonstrated that he remained opioid-free, and his health continued to improve. By 1927, his niece remarked in a letter, "My! You never saw such a change in anyone. He looks ten years younger, has no use for a cane now, steps quick and holds himself so straight."

The healing recommendations in the Cayce readings—nutritious food, nature, and self-examination—predicted the therapies that the most successful detox facilities use in 2018. Current medical research echoes the Cayce recommendations of including a healthy diet, exercise, individual and/or group counseling, and social services like employment or family services as important parts to recovering from opioid addiction. The account of Dr. [5618] provides a practical template for treating opioid addiction as well as a story of hope for all those dealing with this powerful health challenge. 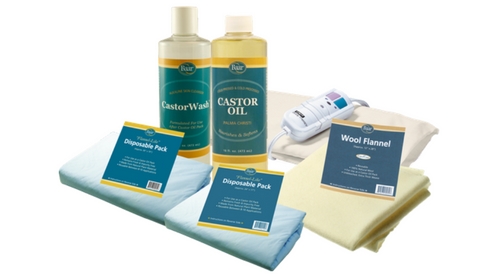 From the Official Supplier of Cayce Care

Castor Oil applied externally in the form of “packs” is a very popular recommendation from the Edgar Cayce readings. Castor oil pack supplies can be found at Baar Products, the official supplier of Cayce Care. 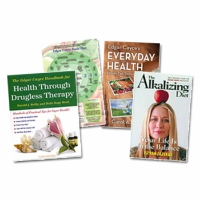 From the Father of Holistic Medicine

The Edgar Cayce on Health Set serves as a profound and valuable resource for the holistic home. Along with the Cayce Diet Wheel, the set contains three books--Edgar Cayce’s Everyday Health, Edgar Cayce’s Handbook for Health Through Drugless Therapy, and The Alkalizing Diet.