Join
Food as Medicine – A Report from the Front Lines
Josephine B. Adamson, MD, MPH, LMT

I recently attended a conference entitled Nutrition as Medicine: how patients can reverse chronic diseases, lose weight, and improve their quality of life through what they eat, and it reinforced what I learned in medical school: our bodies try to move towards healing. Our job is to work with our bodies and to supply plenty of clean water, proper nutrients through a healthy diet, stimulation through exercise, and rest through meditation, relaxation, and sleep. The Cayce readings emphasize a plant-based diet, daily exercise, fresh air, strong relationships, and most importantly, our attitudes, as keys to health. Over and over again, the readings recommended these keys to people seeking to prevent disease but also to those seeking to heal. The readings present a holistic approach to health, seeing health not as the absence of disease but as the presence of strong defense systems that protect us from infections, toxins, excessive inflammation, and cancer growth. Modern medicine is beginning to catch up to the common sense presented in the Cayce readings. The keynote speaker at the Nutrition as Medicine Conference, Dr. Dean Ornish, described what he called four life elements, “Eat well. Move more. Stress less. Love more.”

All of the prominent speakers’ messages echoed the information from the Cayce readings: not only can a whole-foods, plant-based diet help prevent chronic disease and cancer, good nutrition can measurably reverse disease. All five of the speakers summarized research into the positive effects of healthy diet on coronary heart disease, diabetes, and various cancers. Several physicians showed images of partially clogged coronary arteries that opened up with radical dietary and lifestyle changes, not medication. The speakers also gave numerous published examples of declining cholesterol rates and lower cancer recurrence in the groups that changed to a whole-foods, plant-based diet. They also pointed to research studies that demonstrated eliminating Type II diabetes through dietary change and resulting weight loss.

Several patients gave powerful testimonials. One 72-year-old man, a former Marine and professional wrestler, told the audience that he changed his diet to a vegan diet, lost 60 pounds and had the diagnosis of diabetes removed from his patient chart at the V.A. Hospital. He exclaimed that he had returned from Vietnam with 10 toes, and he sure wasn’t going to let diabetes take any of them now! Another heart patient described how eliminating animal products from her diet dropped her dangerously-high cholesterol to normal levels. She also found that her chronic depression and sleep apnea disappeared. While adopting a vegan diet may seem extreme, for these patients who were facing loss of limbs and open-heart surgery, it was the least extreme option. For those with chronic disease, eliminating or reducing red meat and dairy products, as encouraged in many Cayce readings, is a good beginning to a healthier diet.

Dr. T. Colin Campbell, the final speaker at the conference, was the only non-physician. Dr. Campbell, a walking advertisement for healthy living, is a sharp and spry 84-year-old professor emeritus of Nutritional Biochemistry at Cornell University. He presented controversial data from his China Study that he interprets as linking animal product consumption to cancer. Though other scientists have refuted his findings that a completely animal-product-free diet is necessary for optimal health, what most current scientific research seems to agree upon is that a diet of whole, non-processed, real foods from plants should comprise the majority of the human diet, with animal products being consumed little, if at all. All the experts agree with other dietary admonitions in the Cayce readings—no fried food, no preservatives, avoid sugar, drink plenty of water, eat locally grown foods, etc.

The Cayce health readings were given primarily for people that were suffering from some illness or physical complaint, so most of the recommendations may not be intended for everyone. Similarly, most of the data the conference speakers presented were from patients who had visited a physician for cardiovascular disease, diabetes, or cancer. Though several speakers showed their lists of “super foods,” the lists were only similar, not identical. There were disagreements too—one speaker recommended eliminating caffeine, while others touted coffee’s health-promoting bioactive components. Similar to what the Cayce readings make clear, my take-home message from the conference was ultimately that our health is our individual responsibility. Our DNA and life experiences differ. Our bodies lead us towards health if we will listen. 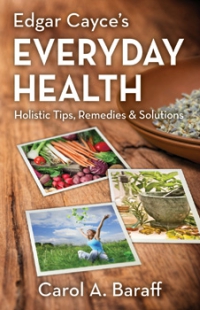 Author Carol Ann Baraff has incorporated her 40 years of researching and writing on holistic health topics from the Edgar Cayce readings into a simple yet complete everyday health guide full of practical solutions, natural remedies, and holistic health perspectives from the "father of holistic medicine" himself.