…remember it has been given that the purpose of the heart is to know yourself to be yourself and yet one with God even as Jesus, even as is represented in God the Father, Christ the Son, and the Holy Spirit; each knowing themselves to be themselves yet One! (Edgar Cayce Reading 281-37)

For the Creative Forces are more even than companionship; for the heritage of each soul is to know itself to be itself yet one with that Creative Force. (Edgar Cayce Reading 1210-1)

One of the foundations of the work of Edgar Cayce is the idea of Oneness. His readings are filled with different ways to express the same concept: Know yourself…to be yourself…and yet part of the whole. In the readings, the whole represents not only the Creative Forces or God but also all other souls. The concept of remaining a unique individual and also part of the whole of creation is a concept that is difficult to understand and express. Many masters have pondered and meditated, seeking to truly understand its meaning and implications. Looking upon a sea of Oneness it is not difficult for a part of us to feel that we could be lost in the vastness; lost to ourselves and lost to others. How can we know that is not the case? Fortunately the Cayce readings also give us direction as to how we can reach this knowing and how to remember what has been forgotten.

Only man forgets! And it is only in His mercy that such was brought about. For what was the first cause? Knowledge — knowledge! What then is that cut off in the beginnings of the Sons of God? Becoming entangled with the daughters of men, and the Daughters of God becoming entangled with the sons of men! As in Adam they forgot what manner of men they were! Only when he lives, he manifests that life that IS the expression of the divine, may man begin to know WHO, where, what and when he was! (Edgar Cayce Reading 294-189)

It is through knowledge and living in same that we then turn this knowledge into wisdom that we begin to remember our heritage and who we are. That the statements of being One, yet individual began to resonate as an unshakeable inner truth. Where can such knowledge be found? Many places, and again the readings help in where to seek.

…the gracious Father manifests to the children of men, in giving that ensample in which the study of same may be seen how that he who understands nature walks close with God. (Edgar Cayce Reading 1904-2)

And nature does give us the answer of Oneness and individuality in the hydrologic cycle of water. Water is an amazing and unique substance that makes life possible. It is the only substance on earth that exists naturally in three phases; as a solid (ice), as a liquid (water), and as a gas (water vapor). It is considered a universal solvent that permeates and affects everything. These three phases are analogous to our existence as body, mind, and spirit and the Oneness these share.

The hydrologic cycle of water is the name given to the process as water goes through its phases in nature. Water in its liquid form is turned into water vapor—its gas form—by the heat of the sun. As it is drawn into the sky, it begins to collect and condense into clouds. In these clouds, ice crystals and snowflakes—water's solid form—are created. When precipitation occurs, the water returns to Earth, depending on the season and locale, as snowflakes or raindrops. 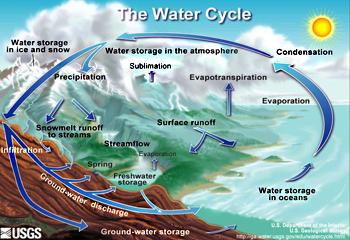 When we see a single drop of water or a single snowflake, we see its individuality. When we look at an ocean, it appears as a homogeneous body of water. Individuality appears to be lost, since we cannot differentiate one drop of water from another. This is where the concept of knowing oneself becomes important.

Imagine yourself as one molecule, a drop of water; by yourself you can easily recognize yourself. Then picture yourself high in the heavens, yet slowing your vibrations down to a freezing level. You become a snowflake, easily recognizable and unique, known to be unlike any other snowflake in the world. Even in a field of snow, the snow can be examined down to each individual, one-of-a-kind snowflake, and identified. Your individuality is visibly intact.

Now with that image in mind, picture the heat of the sun raising your vibrations until, as the snowflake, you melt and flow into a great ocean of Oneness. The sun continues to raise your vibrations and you spread out into an even greater expanse of Oneness as a gaseous water vapor. Have you lost your sense of individuality? No, you have only moved through phases. Your individual consciousness is still intact. Just, because a limited three-dimensional material viewpoint does not see it does not mean it is not there. Your unique snowflake individuality is still there, only your phase has changed. If you slow your vibrations down to freezing again, your uniqueness is visible in material manifestation. 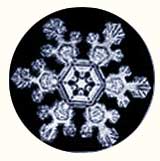 A picture of a Snow Crystal taken by Wilson Bentley, "The Snowflake Man."

God always gives us a way to know Him, to be His friend and co-creator. Sometimes this knowledge surrounds us so completely that we can miss seeing it. Nature's water cycle is one such an example, but once recognized it can help in understanding how we can become One with the Creative Forces yet know ourselves to be ourselves at the same time. For me, it is also helpful in understanding the cycle of reincarnation, of being in Spirit and returning to Earth time and time again, always with the opportunity to return to Spirit.

Don Carroll had a career of over thirty years in the Fire/Rescue service. After receiving his degree in Fire Science, he worked as a district chief for a battalion, an operations company officer, an emergency medical technician, a paramedic, and a teacher at the regional fire academy. While raising a family, he pursued the greater meaning of life, reading materials on Edgar Cayce and attending A.R.E. conferences, seminars, tours, and retreats. He is the author of the article Visions Lead to 'Archaeological Discovery' about the Great Pyramid with Randy Griffith in the June-Sept. issue of Venture Inward Magazine, available in the online member-only section.