In November 1976, I went on my first A.R.E. overseas tour to Egypt, Jordan, and Israel. This fabulous adventure with over 100 participants was led by Hugh Lynn Cayce, the elder son of Edgar Cayce. With special permission, small groups of our members were allowed to spend the night in the King’s Chamber of the Great Pyramid! I eagerly volunteered and, although sleeping on a thin mat on a very dusty stone floor was uncomfortable, I was so excited that nothing else mattered.

We were locked inside the pyramid for the night with a portable toilet around the corner. Our group voted to have a candle lit since when the electricity was turned off, this mysterious chamber was totally and completely dark. Mark Lehner, who has become a renowned Egyptologist, told us that if any problem arose, we should just say “Zahi, Zahi” to the guards. For many years, Dr. Zahi Hawass was the senior official in charge of the monuments on the Giza Plateau. Mark went on to help measure and map the Sphinx with great detail and accuracy and to lead the excavation of the Lost City of the Pyramids where the workers who built these wonders had lived.

Recently I came across the notes I made during the night I spent in the pyramid:

Despite sleeping poorly, I recorded a dream that revealed some of my anxiety about this unique experience:

I dreamed we were in a pyramid in Tibet. A wild and mangy dog got in the gates and came in where we were up on top of small picnic tables. I was afraid. The dogs ate and growled, and I turned over two tables in fright. Somehow I crossed the room, but I wanted to get back to where I had been. The guards were Arabs with rifles, and we all wondered how the dogs had gotten in. By the time we left, we felt better about the dogs.

During our stay in Cairo, our tour members were able to participate in three psychic experiments designed to test the effects of the Great Pyramid on clairvoyance, telepathy, and dreams:

After we returned home and the results of the experiments were analyzed, Charles Thomas wrote a letter to the group outlining some of the results:

It seemed that the pyramid shielded individuals inside the King’s Chamber from outside influences. Since the Cayce readings say that the Great Pyramid was a temple of initiation in which Jesus and John the Baptist underwent spiritual training and had mystical experiences, it would seem that shielding initiates from external influences would have been very important.

Ann Jaffin, MS, a former teacher, is an A.R.E. Life Member, and a forty-year student of Edgar Cayce’s work. In a stunning karmic “coincidence,” Ann and her husband discovered that 20 Cayce readings were given for their extended family. Her book, "Past Lives and Present Karma," published by A.R.E. Press, is a comprehensive study of reincarnation. Retired from the Federal Government, Ann has a Masters Degree in Family and Community Development from the University of Maryland.

See all by Ann Jaffin, MS 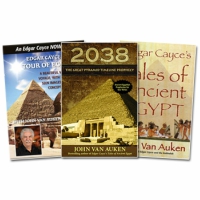