Mandala is a Sanskrit word meaning circle. In this case, the circle refers to the symbol for "All that is," especially all that can be, or Creation's complete and full potential, the unmanifest. The psychoanalyst Carl Jung brought mandalas to our attention and noted that they often appeared in conjunction with the square motif.

Jung noted that the square, a four-sided figure, seemed to be a universal (archetypal) theme about life on earth, as in "the four directions" or the "four corners of the earth." What is the significance, then, of the circle and square together?

The mystical geometers of ancient Egypt used only two tools—a compass and a ruler—to explore the realms. Using only these, they devised methods of creating known forms in creation. However, they discovered that for a given circle, it was not possible to create a square that contained exactly the same area within it as the circle. 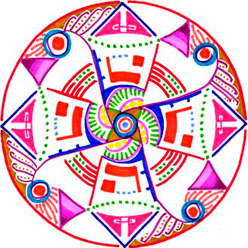 They interpreted this fact to mean that no one could, in their lifetime, give complete expression (manifestation within the four corners of the earth) of the full potential the creator had implanted within each soul. "Squaring the circle" came to mean the imperfect expression in the earth of the perfection of the underlying creation.

Both Edgar Cayce and Carl Jung expressed the same idea, in different terms, about the goal of a lifetime. Cayce called it "individuality," Jung called it "individuation." What both meant by these similar terms was that we each grow to become individual, unique, incomplete, and imperfect expressions of the universal creative principle that underlies all life. A mandala expresses that blend of the unique and the universal.

I started a blog to share my daily attempt to "square the circle," in the form of a mandala. I believe that there will come a time when the collective consciousness is aware of all our voices, and we will learn to sing in harmony. To me, singing in harmony means each of us sharing of our authentic voice, and the harmony is the harmony not of sameness, but instead is expressive of the great mystery: how the underlying oneness manifests in so many particulars. 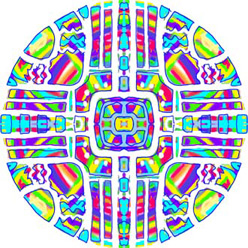 Before the advent of separation and judgment, as detailed, for example, in the fall of the Garden of Eden, there was an instinctive, although unconscious, harmony among the particulars of creation.

It has been our path to move beyond separation and judgment to achieve the next phase of creation. My studies and personal exploration in spiritual psychology, from Anthroposophy to Zen, has led me to the hypothesis that simply "being yourself" is the path. It is a path with heart, as it requires a certain acceptance and love for what is, rather than for what, according to judgments, "should be."

So I create and share my mandalas daily even though they are, from the standpoint of judging their artistic merits or quality of construction, imperfect, irregular, coarse or roughly hewn. Nevertheless, they reflect me. They express, I believe, the prayer that goes into their creation, that when viewed by others, the mandala will remind the viewer that it is OK to be themselves. It is OK to be as they are.

There has been a lot written about the inner effect of making mandalas. I'll not repeat any of that here, but encourage you to find out for yourself. I hope that these mandalas awaken the heart of the viewer more than words can do, maybe even inspiring the viewer to muse inwardly, "Hey, those mandalas look like fun; I could do one myself!" 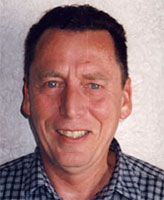 Henry Reed, PhD, has been the prime designer of A.R.E.'s psychic development program, in its various aspects, for more than 20 years. He also developed A.R.E.'s program of evaluating psychics. He has published scientific articles on his research into intuition and psychic functioning and is a regular contributor to A.R.E.'s member magazine Venture Inward. He is the author of Edgar Cayce on Awakening Your Psychic Powers, Edgar Cayce on Channeling Your Higher Self, and Your Intuitive Heart. He is also a regular contributor to A.R.E.'s member magazine, Venture Inward, and a co-author of the book Contemporary Cayce. He developed the program “Discover the World of the Intuitive Heart” for the Edgar Cayce Institute for Intuitive Studies, and is a researcher on the topics of dream work and psychic phenomena.

See all by Henry Reed, PhD

Subscribe To RSS
Search the Blog
Categories
From Karma to Grace 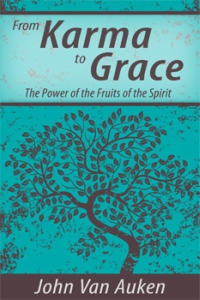 The Power of the Fruit of the Spirit

Improve your relationships, embrace a happier and healthier life, and realize your soul’s full potential with author John Van Auken's simple yet profound advice that takes one from living in the grind of karma to the light and peace of grace, using the foundation of spiritual living found in the psychic readings of Edgar Cayce.