Most people know that the Great Pyramid has four sides. Many assume that they are flat. What is not well known is that the pyramid’s sides are not perfectly flat. And they never have been. At the time they were completed, the sides were covered with casing-stones made of white Tura limestone, which gave the finished Pyramid a smooth surface. Most of the original casing stones have been removed. The process of removing them started about 700 years ago. Originally, they were removed so that they could be used in the construction of other buildings in the Cairo vicinity. The remaining core masonry blocks are set in a stair-step fashion.

The fact that the sides of the Great Pyramid are not perfectly flat and straight was discovered 130 years ago by Sir William Matthew Flinders Petrie. Flinders Petrie is known as the father of Egyptology. Petrie, a skillful surveyor, decided to do a precise survey of the Great Pyramid’s base and structure and also make thorough measurements of the pyramid’s interior chambers, passageways, and features. While doing his survey, Petrie noticed that the middle of each base-side of the pyramid’s core masonry was “distinctly hollowed in” (some 30 inches) instead of straight from corner to corner, and that “each side has a sort of groove” that ran from the top down the middle of the sides.

From the outer edges, the surface slants slightly inward toward the center, making a vertical center-line from the apex down the middle of each triangular side. Near the bottom, the center-line branches off left and right to form a triangle inset at the bottom center of each base-side. 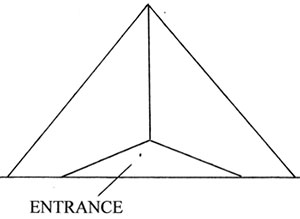 Each side of the Great Pyramid was built with these angles in it, and some photographs of the pyramid show them. They are most visible when the sun makes shadows on the angles of the sides.

Why did the ancients build the pyramid’s sides angled in towards the center-line instead of making the sides perfectly flat? I believe there was a logical reason, which I will explain.

When Petrie began to do his survey of the Great Pyramid, he cleared away the sand and rubble where the four cornerstones had once sat. He found the rectangular flat depressions or sockets that were carved in the bedrock at the four corners; the casing-cornerstones sat in these corner-sockets until they were removed hundreds of years ago with most of the other casing-stones. Petrie measured the distance from the end of one corner-socket to the end of the next corner-socket at the other end of the pyramid’s base-side. He measured all four sides in this manner. 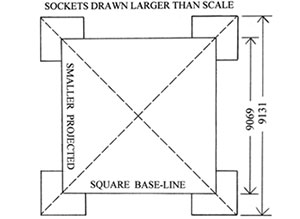 The distance of 36,525 inches around the base perimeter is also significant because a half-minute of longitude at the earth’s equator is equal to 36,525 inches. The earth is divided with longitude and latitude lines. The modern calculation of one-half minute longitude at the equator is 36,523 inches. It is a reasonable deduction, as I see it, that the builders deliberately made the base perimeter equal to one-half minute longitude. 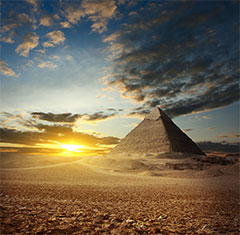 Timothy Milby is a long-time A.R.E. member and author of the book The Great Pyramid’s Secret Code and The Road to Atlantis: The Pyramid’s Amazing Mathematic Code Revealed. Milby has studied the Great Pyramid extensively—the design of its chambers and passageways and its many features and details.

See all by Timothy Milby 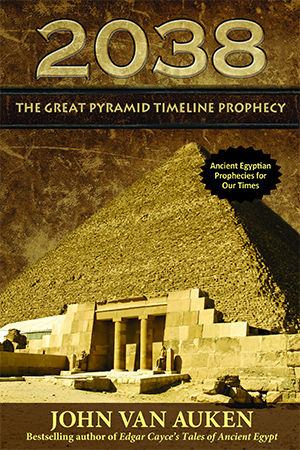 Does the Great Pyramid Hold the Secret to Our Journey Here on Earth? Inside the Great Pyramid in Egypt is a prophecy in stone that points to these present times, especially to the years from 1958 to 2038. Edgar Cayce expert John Van Auken reveals the secrets of the timeline.