The Law of One from Ancient Egypt

An Egypt Study Group meets at A.R.E. Headquarters in Virginia Beach, Va., every Tuesday to discuss the Cayce readings on Egypt circa 10,500 B.C. Recently, the group studied the "Law of One" based on the rich information found in the readings. According to the readings, this became a time of enlightenment which influenced the entire world and ages that followed, including the present. The readings refer to it as, "one of the most momentous occasions or periods in the world's history." (900-275)

"...in the succeeding generations, as thought is turned into those channels, the same will be as that in the beginning; for, as seen, none are being drawn into that purpose of the establishing of this more close relation of God's truth in earth...other than those that first established same in that land now known as Egypt...in that momentous period in man's understanding." (Edgar Cayce reading 254-42) 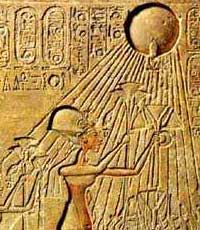 The readings weave an intricate story of Edgar Cayce as the high priest RaTa who established temples in Egypt based on the Law of One. The Temple of Sacrifice was similar to a hospital and spa that cleansed and transformed the physical body using surgery, changing thought patterns and activities, and through diet. The Temple Beautiful is comparable to a university or center for the arts, and used vocational guidance for training based on what was best for each individual. Education was for service to God and country. Spiritual truths and cosmic laws were part of the curriculum along with meditation and prayer; always relating to the thesis upon which everything was based: to know more of one's relationship to the Creative Forces or God and the manner in which this could be expressed in relationships with others for the creation of a harmonious and peaceful world.

Here began the preparation for that later called the Great Pyramid to preserve the understandings from this time for future generations. It was designed in relation to the position of the stars and contained prophecies of humanity's spiritual evolution. Hermes was the construction architect and Isis served as the advisor.

"Then began what may be truly termed the first national or nation Spirit of a peoples; for with the divisions, rather than this causing a dispersing of ideals or a dividing up of interests, it centralized the interests; [RaTa] was…preparing for this very spirit to manifest itself in the way of the national emblems, the national ideas, that stood for the varied activities of not only individuals or groups, but for the general masses." (294-151)

The great teachers of the world were called into Egypt to correlate their understandings of the Law of One God. They unified the teachings for the creation of a harmonious and peaceful world. This period became the foundation of the Master's teachings. Emissaries were sent to distant lands to spread the truths and establish Temples.

The Law of One is based on living the Fruits of the Spirit; not just understanding but gaining wisdom through daily practice and application of the laws. This ideal is synthesized in the phrase "That we may make manifest the love of God and Man." (254-42)


That single ideal of that period and the Law of One was expressed repeatedly:

"Let's don't forget the thesis, or the key for which all of this understanding had come: that there might be a closer relationship of man to the Creator, and of man to man." (294-149) "...there was the absorbing of the ideals and ideas of the Priest [Ra Ta], or the turning of the ideas into ideals, through the seeking to comprehend, to understand, and then to practically apply the tenets of "The Lord thy God is One." 2062-1

"...as was given by the law of One during that sojourn, and as is the experience in the present, God is within—and the manifestations of His love and His mercy in and among his fellow man may be best known by the acts, the deeds—yea, even the very thoughts of man as in relationships to his fellow man." (509-1)

"To know more of man's relationship to the creative influences, or God, and the manner in which he may manifest same in his relationships to his fellow man." (254-111)

Daily living of the Law of One was the ideal:

"…when the peoples were first seeking the rule of spirit and of the knowledge of the inner self. The entity…gained much…through service and sacrifice...this as a living example rather than as rule or regulation." (2728-2)

"And holding to those tenets of the Law of One, as to the fruits of the spirit...that is: As ye would have another be, that be thyself.
Do not ask another to do that ye would not do thyself.
Make concessions only to the weak.
Defy the strong if they are in the wrong…

"For God is not mocked, and whatsoever a person soweth, that must he reap!
"Only in the fruits of the spirit—as of longsuffering and patience and mercy and brotherly love and kindness and gentleness—may the true meaning of life's experience and the purposes of life, and in the associations with others, be understood… (1336-1)

Meeting a Soul Closely Associated with the Christ

The Power of Forgiveness