The Unseen Forces, Beings,
and the War between Light and Dark
By John Van Auken

With a new age of enlightenment fast coming upon us, we need to learn and apply the influences of what 72 of Edgar Cayce’s discourses call, "the unseen forces." These readings describe the unseen forces as "a consciousness of that divine force that emanates in Life itself in this material plane." ( Edgar Cayce Reading 281-7, my emphasis)

According to these discourses, the unseen forces are more powerful than the seen, or what some call reality. (Edgar Cayce Reading 262-8) The laws and physics of material reality are, according to the readings, the result, not the cause or source of our situations or abilities. All projected life in this world comes from unseen influences within, not without. 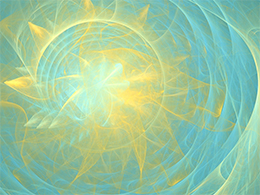 Even human weaknesses and evil are a result of the misuse of free will, a misuse that began in the spirit and mind, long before material life even began. The implication here is that all outer influences, whether they are good or evil, emanate from the unseen realms of spirit and mind.

Cayce’s readings acknowledge the "warring" that occurs within us and between the unseen realms and the seen. (281-7) His readings even call this war the true Armageddon, a battle between the influences entering the earth plane and those being forced out of it. (3976-15)

Even the light-bearing souls struggle against dark forces within themselves to maintain their hold on the Light. It is difficult to be pure channels of the Light in this life, in our families and workplaces, even in our own hearts and minds. It is a terrible battle, a war of selfishness and darkness against loving care for others and the light of truth, hope, and love. 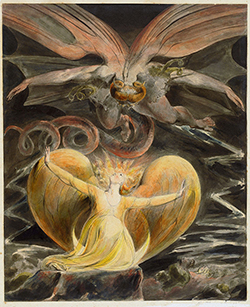 The Great Red Dragon and the Woman Clothed in Sun
by  William Blake (1805)
is one of a series of illustrations of Revelation 12 Source: http://en.wikipedia.org/

Cayce’s readings warn the Children of God, the Children of the Law of One (as he often referred to them), to seek and maintain their awareness of the divine forces, for these will protect them from dark intentions of others and from the weaknesses within themselves. "As has been given, and as experienced by many, in opening self to the unseen forces about us, yet warred ever by those influences save when in the presence of His influence, then as the forces are raised in self know—without doubt—there are His protecting influences, able, willing, capable, and will aid in that direction in which such vibrations, such influences, are raised to those individuals to whom they be directed, even by the spoken word; for, as is seen, as is understood by many, by most, that the unseen forces are the active forces, the active principles." (281-7)

In order to avoid the subtle, insidious influence of evil and selfishness, even the best among us must seek the protection and assistance of the divine influence, that consciousness of the divine with us. "The spirit is indeed willing, but the flesh is weak," taught Jesus Christ, who faced Satan’s temptations and walked away. (Matthew 26:41 and Mark 1:3) And when we fail to maintain our mindfulness of the divine and the higher bodily vibrations of the divine awakened within us, we must get up and try again, never condemning ourselves or limiting the divine’s ability to redeem us, to cleanse us and make us stronger.

Cayce’s reading: "Be not faint hearted because failure seems to be in thy way, or that self falters—but "how many times shall I forgive, or ask forgiveness—seven times?" "Yea, seventy times seven!" or, "not how I faltered, but did I seek His face again?" "Could ye not watch with me one hour?" The man crying out! "Sleep on, now, and take thy rest, for the hour cometh when I shall be even alone." So we find the changes, the weaknesses in the flesh—yet he that seeks shall find, and as oft as ye knock will the answer come. Seek to be one with Him, in body, in mind, in soul!" (281-7)

Life is a challenge. It is a dance between self-centeredness and a cooperative self that is aware of and seeking the Creative Forces, the Good Forces, and a love for all.

John Van Auken is a director at Edgar Cayce’s A.R.E., and is one of the organization’s most popular speakers, traveling throughout the U.S. and abroad to address audiences on the body- mind-spirit topics found in the Edgar Cayce readings. Having studied the Edgar Cayce material for nearly 40 years, he is an acknowledged expert on the Cayce readings, and on the Bible, ancient prophecies, world religions, meditation, and ancient Egypt. He conducts seminars in the U.S. and abroad (see EdgarCayce.org/Conferences), and is a tour guide to the many sacred sites around the world, including the upcoming trip to China. He is the author of more than 20 books including the recently released Edgar Cayce on the Spiritual Forces Within You, and the best sellers From Karma to Grace, 2038: The Great Pyramid Timeline Prophecy, and Edgar Cayce and the Kabbalah: A Resource for Soulful Living.