Join
What Is the Real Date of Jesus' Birth?
Kevin J. Todeschi

Q) I have seen two dates given for the birth of Jesus, January 6 and March 18. I saw both dates in the readings. Which is correct? Thanks.

A) Virtually the same question was asked in December 1939, in this reading:

(Q) In one Reading we are told Jesus' birthday was on March 19 according as we would reckon time now. In another Reading we were told that we keep Christmas about the right time, the 24th or 25th of December as we have our time now. Please explain seeming contradiction.

(A) Both are correct according to the time from which same were reckoned. How many times have there been the reckonings? Take these in consideration, with the period of events being followed in the information indicated. Just as there was the reckoning from the various groups for their individual activity, so was the information given as to the records from that source with which those seeking were concerned.

The “reckoning” is really about reckoning the changeover from the Julian to the Gregorian calendars. The Julian calendar (named after Julius Caesar) was introduced in 45 BC. It was the commonly used calendar until the late 1500s when, in 1582 papal decry adopted the Gregorian calendar. Because the two calendars differ very slightly in the number of days each year, between October 1582 and the 1900s 56 days would have had to have been dropped from the Julian calendar to put it back in sync with the seasons and the earth’s rotation around the sun:

As one example, the papal bull of February 1582, made a decree that 10 days should be dropped from October 1582, resulting in the dates going from October 4, to October 15, in just one day!

With the above in mind, both dates are correct, depending upon which calendar is being referenced.

How to Ask Edgar

Though Edgar Cayce died in 1945, he left us a legacy of 14,306 readings covering an astonishing 10,000 topics in about 24 million words! Send your question through our Ask Edgar Submission Form, and a staff person or volunteer will mine the readings database for an answer. Though we can't promise that all questions will be answered, you can check our Ask Edgar blog category for a response to yours or similar questions.

is Executive Director and CEO of Edgar Cayce’s Association for Research & Enlightenment (A.R.E.), and Atlantic University. As both student and teacher of the Edgar Cayce material for more than 40 years, he has lectured on five continents in front of thousands of individuals. A prolific writer, his publications include, Edgar Cayce on Mastering Your Spiritual Growth, Edgar Cayce on Angels and the Angelic Forces and the Edgar Cayce Co-Creation App. 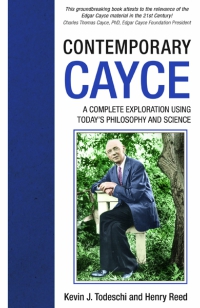