The dominating astrological influences for the past few years have been the interplay of three archetypal patterns forming various stressful aspects with each other:

Right now, it is not difficult to see these themes permeating our world, and these influences are continuing. In May 2018, Uranus is entering the sign of Taurus and will reflect additional changes and upheavals in the area of resources: financial as well as the earth’s resources.

The recent astrological roots of the present situation are found back in the 1960s when Uranus and Pluto were conjunct. By 2008, Uranus had moved ahead to form a 90-degree angle (square) with Pluto, thus symbolizing the issues that had not yet been resolved from the ‘60s and were returning to be faced again. (See “The Coming Years, Astrologer’s Corner,” Jan/ Feb 2008, Venture Inward). Today, the Uranus/ Pluto aspect is still within orb, and the archetypal influences of these two planets continue to surround us.

During its seven- to eight-year transit of Taurus that begins in May 2018, Uranus will illuminate opportunities to change how we use our resources, including our time, energy, money, and the natural resources of Mother Earth. There can be unexpected disruptions that will lead to global transformation of all types of financial resources, such as businesses, housing markets, stock markets, commodities, banking systems, monetary policies, currencies, debts, etc.

A deeper meaning of the Taurus archetype is associated with our priorities in life. We are often unaware of our deeper values held on an unconscious level, yet they determine how we use our resources. What are our present priorities with regard to our resources? How do our values need to change so that we have the resources to sustain our personal lives as well as life on earth? These are major questions for us individually as well as for humanity in general over the next seven to eight years.

Uranus can indicate upheaval, but it also rules Aquarius, the coming age, and suggests the possibility of more originality, inventiveness, freedom, and independence. There can be new discoveries that increase our ability to sustain life in new ways: one example is our increasing ability to produce electric power and energy from the Sun and wind without damage to the earth and her resources. Uranus rules electricity, lightning, and storms of all kinds—literally and symbolically—and is sometimes called the Great Awakener. Being “awakened” is meant in an esoteric sense, but actually, individuals can have trouble sleeping during a Uranus transit in their chart. Uranus emboldens risk-taking, whereas Taurus represents a need for security. We may experience clashes where the underlying conflict is between these two opposite polarities.

Uranus also influences social change and humanitarian issues of all kinds. Hopefully, this side of Uranus will enable us to realize that, if the human race is to survive, we must come together to set priorities regarding the conservation of our planet’s resources.

Overlapping the influences of Uranus in Taurus that are in effect until 2026, will be another major astrological configuration in 2020: the conjunction of Saturn and Pluto in Capricorn. And then in 2024, Pluto will finally leave Capricorn and move into Aquarius. These are and will continue to be times of great change, moving us toward the expanded consciousness of the Aquarian Age.

While Astrology has a predictive quality to it, it does not forecast the future in great detail. In fact, the Cayce readings state that we all have free will and within the parameters of the archetypal influences, we use our free will to make the best decisions in response to the astrological influences in our lives.

As the Cayce readings remind us, we are constantly making decisions regarding the circumstances of our lives. Therefore, how these influences of Saturn, Uranus, and Pluto manifest in the future is unknown and depends on our individual choices on how to act, and how to react to situations in our lives.

A Salute to Raye Mathis!

After more than a dozen years of being a featured columnist in Venture Inward magazine, Raye has decided to retire. She will be missed by readers worldwide. A student of the Edgar Cayce material since the early 1960s, in addition to her excellent astrology column, Raye has served the organization in a number of roles: as a speaker at A.R.E. Conferences, a teacher at Atlantic University, and board member of the Edgar Cayce organizations. Thank you, Raye, for everything! For information on Raye's ongoing astrological eGroups, contact her at rayemathis22@gmail.com

Raye Mathis is a member of the faculty at Atlantic University where she teaches Spiritual Crisis and Symbols and Mythology courses. She has a BA in mathematics, a Master's degree in clinical social work, and has completed post-graduate work at the C. G. Jung Institute in Zurich, Switzerland. She has maintained an on-going astrological counseling practice for almost 40 years.

See all by Raye Mathis

Subscribe To RSS
Search the Blog
Categories
Crystals and Gemstones 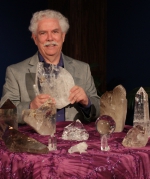 Only via the A.R.E. Catalog can you procure powerful, energetic gemstones and crystals hand-selected by John Van Auken. Smoky quartz to transform, citrine for clarity and creativity, or mica for meaning and more. Find your one-of-a-kind, Van Auken-approved pieces here.

Where Should You Live?

Where you live or travel affects how you feel, and this specialized Astrology report explains why. Simply provide us with up to five locations (a minimum of three is required) of your choice, and we'll compare those locations to your birth information to help you venture forth.